1. What is normal sleep?

Sleep is a biological condition of unconsciousness that is reversible, characterized by a recumbent posture (lying down), lack of mobility (absence of body movements), closed eyes, and reduced arousal ability (waking up).

Human sleep is directly influenced by the sunlight’s effect on the brain (Circadian control), and the duration of wakefulness before sleeping (Homeostatic control).

Sleep occurs with a slowing of the cellular activity of the brain and progresses rhythmically from light sleep (Stages 1 & 2) to deep sleep (Stages 3 & 4), and then to dream sleep (REM sleep or rapid eye movement sleep). As sleep progresses, the body’s muscles gradually relax and eventually become paralyzed in REM sleep (except for short bursts of eye movements).

Infants and children have a greater drive for sleep as growth occurs. This need to sleep is decreased gradually with aging and results in less sleep at night. Many older adults compensate by napping during the day. Children need 8 to 10 hours of sleep a night. Adolescents need more sleep than adults who need 7 to 8 hours of sleep a day. 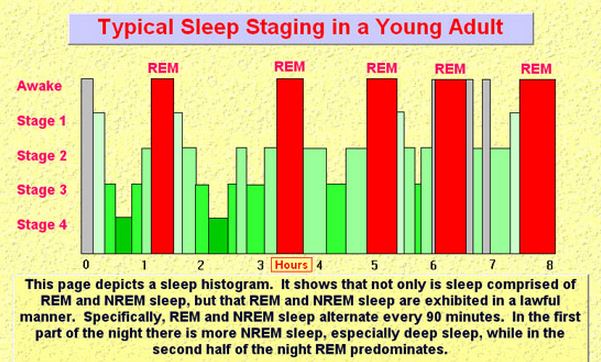 This graph shows the normal progression of sleep through the 5 stages showing a repetitive pattern every 90 to 120 minutes. Note how REM sleep alternates with non-REM sleep.

2. What are the effects of insufficient or disrupted sleep?

Most people with Insomnia have a difficulty in falling asleep; difficulty staying asleep; waking up unrefreshed or tired wanting to sleep longer; or have daytime sleepiness or urges to sleep during the day. This is common to the majority of patients with sleep disorders.

Very rarely, abnormal behaviors (Parasomnias) in sleep such as sleep walking, night terrors, confusional arousals, and violence in sleep associated with dreams (REM Behavior Disorder) are a concern and pose a risk of injury in sleep. 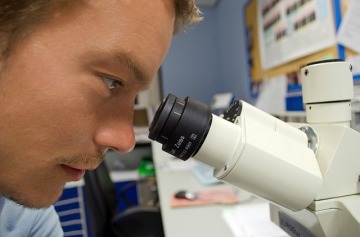